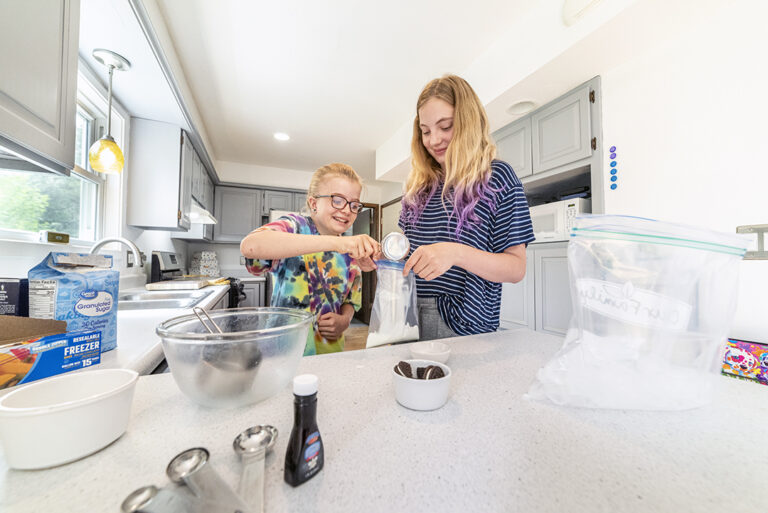 Making ice cream at home is a fun activity to do with kids at any age, and most of the ingredients you already have in your fridge and cupboards! Follow our instructions for a simple homemade ice cream—no machine needed.

In the gallon sized bag, combine the salt and ice.

Mix the remaining ingredients in the smaller bag and seal the bag tightly.

Place the smaller bag inside the gallon bag and shake the bag for about 5 minutes until your ice cream begins to solidify. Tip: wear gloves during this step; the bag can get very cold!

Where did ice cream come from?

Believe it or not, ice cream wasn’t always a popular treat. The International Dairy Foods Association dates ice cream back to the second century B.C. There are several references to a snow and ice flavored treat that Alexander the Great enjoyed, as well as references to the Biblical character King Solomon. The term “cream ice” wasn’t evoked until sometime in the 16th century though, from King Charles the first and the Medici family in the mid-1500s. Finally, in 1660, ice cream was made available to more than just the royals.

America adopted ice cream in the 1700s, but it was considered a rare and exotic dessert enjoyed mostly by the upper class until insulated ice houses were invented in 1800. Ask your kids if they can imagine a world without ice cream!

Science Behind the Sugary Sweet Treat

Instead of placing your mixture in the freezer for hours waiting for it to get hard enough to eat, the ice and salt mixture speeds up the freezing process. Shaking the bag allows the warm, creamy mixture to move around to allow for better freezing and the air makes the ice cream a bit fluffier. Yum!