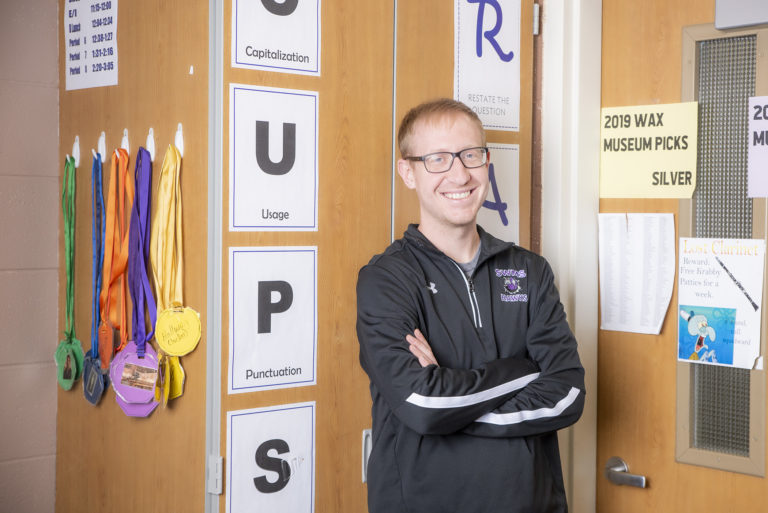 Taking inspiration from his parents, both with teaching professions, Marshall Kambestad knew at an early age he wanted to be a teacher for the positive impact they make in students’ lives.

Middle school is a time for students and their families to transition. As a sixth-grader, they are facing a new school, new classmates, and more than one teacher they have to see day after day.

“In sixth grade, students are still exploring the world and it’s fun guiding them to find their footing in middle school,” said Marshall.

Taking his role as a mentor and leader to the next level, Marshall attends as many student activities as possible. Whether it is a black belt testing for karate to synchronized swimming meets, he does his best to make sure every student feels welcomed and cared for.

Marshall began his career in Sioux Falls before making his way back to his hometown of Rapid City. After eight years of teaching, English has easily become Marshall’s favorite subject.

“You really get to see the creative side of kids and get to know them better,” explained Marshall. “Just based on the writing projects we do, their personalities really come through.”

As a runner and a past coach, Marshall creates an atmosphere that is relaxed but challenging when students are in his classroom. He raises the bar and encourages his kids to bring their “A-Game” to class each day – resulting in accomplishments his students can truly be proud of.

“Mr. Kambestad has made my sixth-grader excited about school and learning again,” said Jennifer Wright – a parent to one of Marshall’s students. “He finds the good in each of his students and encourages them to do their best.”

From memorizing 100-second speeches the students write themselves, to working in groups and critiquing anonymous writings, both kids and parents admire the steps Marshall takes to set his students up for success. And during a time of numerous changes, it’s the little things like being available and putting in the extra work that make a difference.