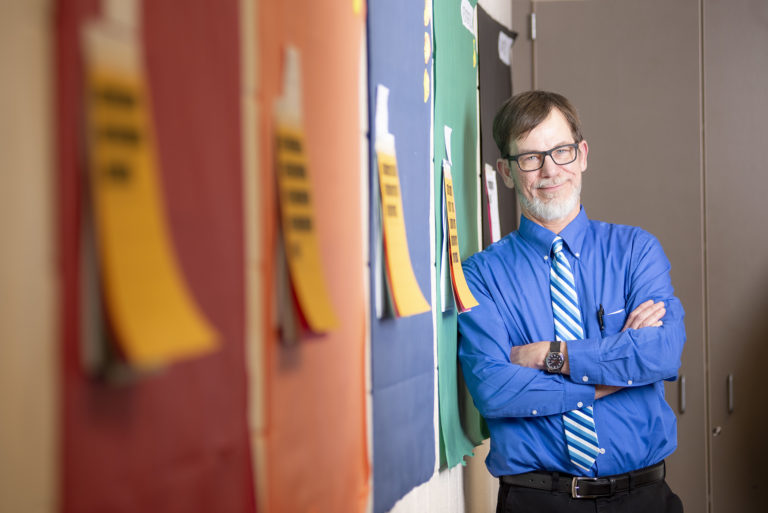 Richard Aaron Jones’s story is unique. Who knew he would become a teacher? As a high school dropout, Jones – as his students call him – did not like school. He never found a sense of support and saw opportunities elsewhere, making the choice to work rather than attend the rest of his schooling career.

Married, and with a son of his own, Jones knew he needed to find something more than his hourly wages. As a broadcaster for the past 15 years, Jones enrolled into college to add to his credentials. Eventually, his History and French classes led him back to education where it clicked – he could make the difference in kids’ lives that he himself didn’t have growing up.

In 2002, Richard, his wife Theresa, and his son Robert moved from Texas to Rapid City taking his first teaching job at Dakota Middle School – later to become East Middle School.

“Middle school is hard; it truly can be the worst time of their life – they are starting to become people but they don’t have any power,” said Jones. “Middle School students still need their teachers to be a mentor for them and a guide. They don’t see you as an obstacle yet.”

Jones is an advocate for more than learning in his classrooms. He stresses the importance of relationships, the importance of a support system, and choices you make. From reading literature to assigning large projects preparing students for high school classes, each lesson can relate back to their individual lives and the choices they make.

For example, learning about a type of storytelling like a “Hero’s Journey” is easy to take in when dissecting a Disney movie. But, reiterating it into his students’ own lives and relating the content to their own journey is what makes his teaching unique.

“Mr. Jones is always giving of his time and talent,” said assistant Principal Terry Lundeen. “He is uplifting to staff and students on a daily bases and takes pride in being here for the right reasons.”

Encouraging good choices, Jones gives students at East Middle School the opportunity to get involved. During lunch, he opens his room to play board games; on Wednesdays, he hosts “Jamin’ with Jones” – letting kids bring their guitars after school and play alongside him, and rarely leaves before 5 o’ clock in the evening throughout the week.

“Mr. Jones knows what it’s like to hate school. But because of his experience, he’s here to make sure kids don’t have that experience themselves,” said Mr. Lundeen.