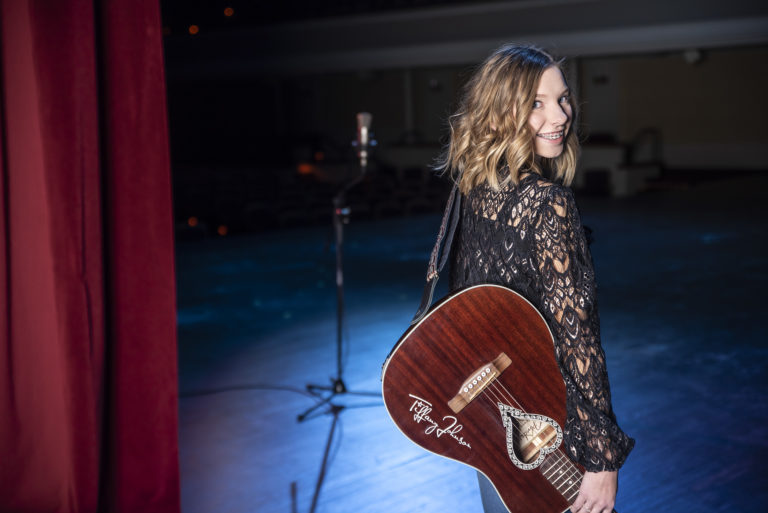 Tiffany Johnson means what she sings.

The Rapid City teenager writes songs that are both personal and universal. An aspiring singer and songwriter, Tiffany delights in not only composing lyrics about life as she knows it, but also weaving together words and melodies in a way that connects with her audience.

“It’s capturing a single moment in your life that other people can relate to,” she said.

The 15-year-old began taking her craft seriously when she was eight, but her penchant for putting feelings to music was apparent long before she wrote anything down.

“It originated when I was really young,” she said. “I would sing about whatever I was doing around the house.”

These days, she draws inspiration from artists like Taylor Swift and Ed Sheeran who pen and perform their own songs.

“I want to be a songwriter,” Tiffany said. “My true passion is in writing songs.”

Last year she paid her first visit to Nashville, where she attended a songwriting camp and performed at such famous venues as the Country Music Hall of Fame and Bluebird Café—the sort of places up-and-coming songwriters are found.

“I was really excited because they’re hard to get into,” she said.

In the meantime, she’s a freshman at Stevens High School, navigating the ups and downs of adolescence. This season of life is never short on subjects for her next song.

“The lyrics just come,” she said. “I’ll be sitting in math class, and I have to write them down.”

One of the more personal tunes she’s written is “Here’s to Forgetting You,” which speaks to leaving the past behind and moving on. Her first song, “This is My Year,” addresses the anxiety children feel as they head back to class.

Tiffany doesn’t just write songs and sing them. She provides her own accompaniment. Her dad taught her how to play guitar, and the pair plays together often. She also plays piano, ukulele and drums.

Tiffany credits the Dahl Arts Center’s Emerging Artists Program with giving her a strong performance foundation. The weekly talent showcase puts promising acts in front of an appreciative local audience. Tiffany stepped up to the open mic in 2014 and never stepped back.

But her sights are set on bigger stages.

“I want to travel around the world,” Tiffany said. “I want … people to be inspired by my songs…I want them to feel something.”

“Tiffany is a great role model and exemplifies what focus, hard work, and persistence (along with a dream) will get you,” said Ross Johnson, Tiffany’s father. “Her story is just beginning and I can’t wait to see what she will accomplish in the future.”