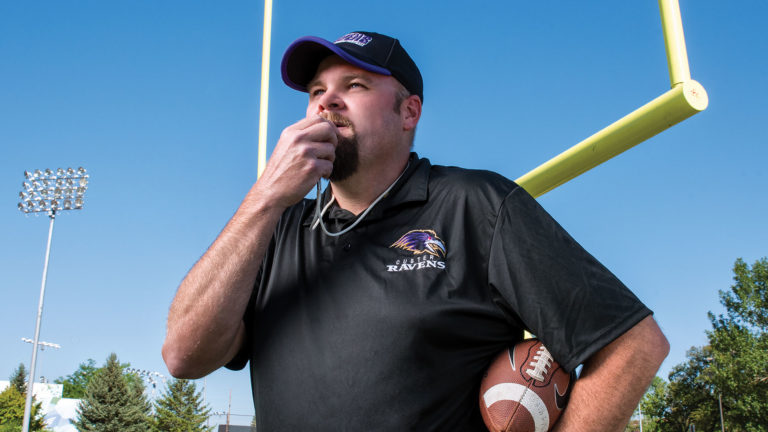 The love of sports started at a young age for Dan Buehler of Hill City, following in his grandfather’s footsteps. Now, with three sons of his own, Dan has been the coach for four different teams including: soccer, basketball, and three football teams – currently coaching the Custer Ravens Peewees.

In 2014, Dan’s oldest son reached the age to play football in the Black Hills Youth Football League, Dan watched practices and games from the sidelines. After watching coaches come and go throughout the season, Dan decided to step up to bring consistency to the team. Little did he know he would be the head coach the following year for the Custer Ravens Mighty Mite.

“It feels great having an influence to set positive examples and help the kids become better individuals,” Dan reminisces looking back on the years of coaching. “I enjoy teaching fundamentals and instilling a good work ethic, especially at an early age.”

Dan is phenomenal in all aspects of coaching. He instills confidence, discipline, sportsmanship, and drive into football — an inspirational person to all he’s involved with.

In a parent’s email titled “overheard in the locker room,” Dan read the story of his team waiting for each other in the locker room to walk out to football practice together. When one child was upset about his missing practice pants, the other teammates lifted him up and ensured him they wouldn’t leave him behind. The kids helped the boy gather his things and they walked out together.

“Coaching is one of the few jobs where you can look back and see your personal contribution and relish all the memories through the journey,” explains Dan. “We can make a lasting impact as coaches and more is learned than just the sport.”

In 2015 – the Mighty Mite team was the first Raven team to make it to the playoffs. The following year, the Junior Peewee team scored a winning season with impressive statistics taking the title of Superbowl champions.

Although the numbers are impressive, Dan has three simple goals he leaves his athletes to remember: have fun, build relationships, and learn the fundamentals. “Good things will happen if you stay focused and work hard in all aspects of life. We’ve had some amazing times together and will have many more.”

View all of the 2017 Coaches of Excellence here.