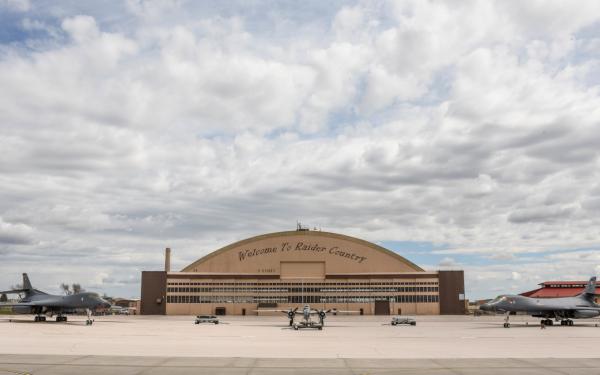 A military career is rewarding but does have challenges, especially for families of enlisted personnel. Deployments, frequent moves, and remote tours of duty all take their toll. It’s a life of constant transition that requires resiliency. Fortunately, the Air Force prides itself on fostering a sense of community, and nowhere is this more evident than at Ellsworth Air Force Base, where several programs have been established to aid spouses and children of airmen and airwomen.

I recently had an opportunity to visit the base and learn more about the services they offer. As a “military brat” myself, I know firsthand the struggles families face, as well as the many rewards of military life, and was excited to hear about two programs in particular that are geared toward spouses and children.

Give Parents a Break

Recognizing the unique stresses faced by Air Force families, the Air Force Aid Society (AFAS) funded and created the Give Parents a Break program. Working in conjunction with the Air Force child care community, GPAB provides free child care one day a month to give parents a break for a few hours from the stresses of parenting. Families can use the time however they see fit. The only requirement is a referral certificate, which can be obtained from a a Child Development Center or Youth Center director, squadron commander/first sergeant, chaplain, doctor, Family Advocacy personnel, or Airman & Family Readiness Center personnel.

GPAB staff care for children aged six weeks to 12 years old. Monthly sessions are scheduled based on the needs of the base community and are most popular during periods of deployment, when the center sees anywhere from 12-20 kids at a time. A minimum of seven children is required for the four-hour sessions to open.

Susan Ratkovsky, Child Development Center Director, said that parents are very grateful for the program. She recounted a story where an active duty father was caring for his four children, all younger than seven, while their mom was deployed to Korea. He dropped his kids off one day and, when asked what he was going to do with his free time, explained that he was just trying to get all the family laundry done! “That’s exactly what the program is for,” Susan said with a smile.

GPAB strives to keep families connected, even when separated by thousands of miles, by sharing events/posting pictures on social media and sending artwork the children have created through the mail to deployed parents. Little touches like these go a long way toward making life a little bit easier for Air Force families.

The Key Spouses program is another initiative designed to help Air Force families. Spouse groups have been around as long as the military has existed, but became more formalized in the late 1990s. Key Spouses serve as a vital communication and support link between commanders and spouses, providing information and resources to spouses of enlisted personnel. The program is comprised of volunteers whose duties include welcoming new families and spouses; building and fostering support systems for unit families; maintaining contact with spouses and families and addressing their concerns; and assisting families in finding base and community resources. They might even pitch in and help to shovel snow.

“The program helps build a sense of community,” says Mounika Sessions, a Key Spouse with the 37th Bomb Squadron. “Support has been fantastic. The ‘Tiger family’ (the squadron’s mascot) provides a safe space for whatever you’re feeling.” Mounika says the Key Spouses program was instrumental in rolling out information quickly when it was announced in March that Ellsworth would be the first base to get the new B-21 Raider bombers. During deployments, they serve as go-betweens, relaying information back and forth; this helps alleviate stress during times of uncertainty.

Sometimes, the two programs even overlap. During a deployment a couple of years ago, Key Spouses took advantage of GPAB and dropped their kids off while they all went downtown for lunch at Delmonico’s in Rapid City. It’s no wonder the group is so tightly-knit!

The number of Key Spouses varies widely throughout the year; there are currently 120 at Ellsworth, a number that fluctuates constantly based on need. The group is always looking for energetic spouses of enlisted personnel interested in helping out; the only requirements are a desire to help others, a commitment to the program goals, and a positive attitude.

Ellsworth AFB has long been closely intertwined with Rapid City, and that relationship is poised to strengthen as additional personnel are assigned to the base in support of the B-21. If you’re curious about Air Force life, a base tour is available to the public; it’s an excellent opportunity to check out EAFB and provides a glimpse of the Cold War era with a visit to a Minuteman II missile training silo. I took the tour myself last summer and it is well worth the price of admission. Be sure to stop by the South Dakota Air and Space Museum adjacent to the visitor’s center, as well! Schedules and admission prices are listed here.