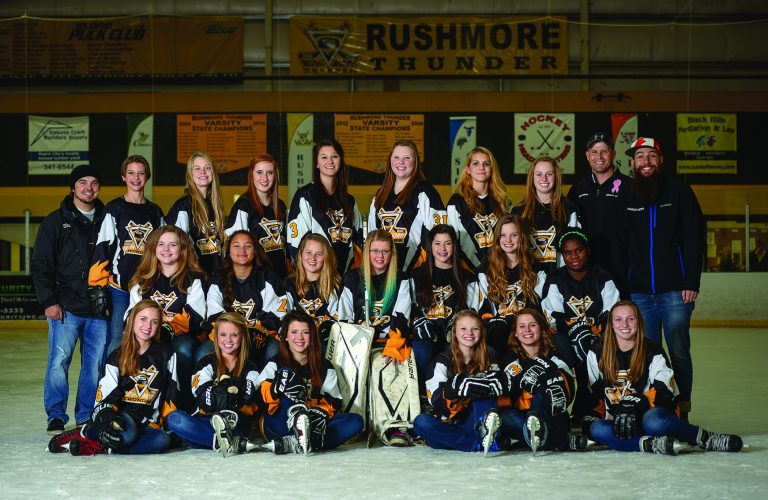 Established in 1995 as the first USA Hockey Association in the Black Hills, The Rushmore Hockey Association, has grown from a small group of kids with no hockey experience to the current group of 335 skaters that boast impressive records.

“Hockey is a bright spot for the Black Hills,” says RHA President Capt. James Johns. “It’s the opportunity for kids to participate in a sport that builds confidence, develops work ethic, and builds a great future.”

The RHA has levels for all players from the young Mini Mites starting at four years old to JV/Varsity players in high school, including a “Learn to Skate” program available to little ones to build confidence in young skaters.

After the need for more ice time increased as the number of players grew, the RHA built the Rushmore Thunderdome in 2003. Constructed on a shoestring budget, the Thunderdome is one-of-a-kind as there are only a handful of associations in the country that own their own rinks.

In 2009, RHA was awarded the National Hockey League Players’ Association grant which supported their fundamental mission to make hockey accessible for all kids. No skater is turned away and by reaching out to these children, RHA has successfully made hockey a reality for nearly
60 skaters in the area.

Over the span of 20 years, the RHA has brought the love of hockey to the Hills. With years of dedicated work by numerous individuals volunteering to maintain the Thunderdome, the sculpting of organized youth hockey has turned from a vision and hope to a reality.

“Dedication and commitment has made RHA what it is today, and great times are ahead for hockey in the Hills,” says James.