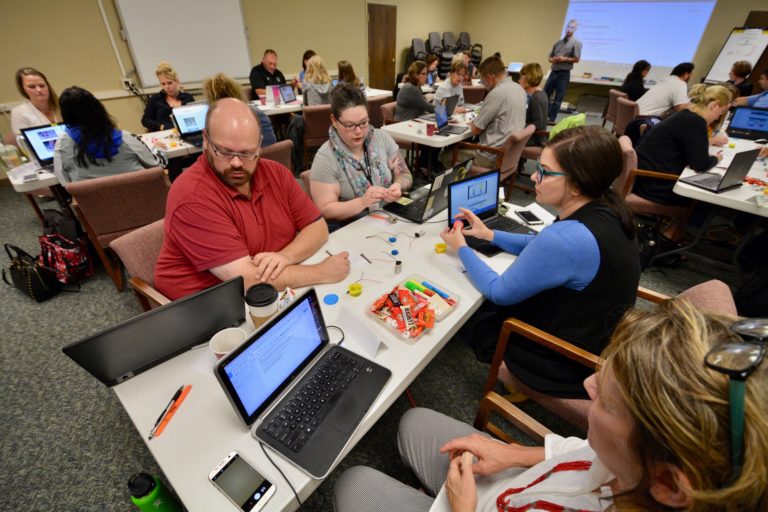 Teachers Learn to Make Keyboards Out of Play-Doh

Local teachers gathered on Friday, Sept. 15 to learn how to implement “Makey Makey” into their classrooms. This dynamic tool uses alligator clips to make keyboards out of anything. Whether bananas, play-doh, or paper—Makey Makey gives kids an introduction to the world of computer programming and even lets them solve real world problems.

“We’re bringing Makey Makey to this district because the Makers Space, like the one at Rapid City Public Library, is bringing in creative thinking, problem solving, and other skills that we want our kids to have,” said organizer Kim Clark. “Along with code.org, we want to have computer science fundamentals taught early. For example, just because students learn history doesn’t mean they’ll become a historian, but they’ll know the concepts of history and know how to think like a historian. Teaching computer science fundamentals let kids know that it is a career option and also gives them transferable skills like problem solving and critical thinking. Computer science really is everywhere.”

About 30 educators, mostly from local elementary schools, packed into a room at the Technology & Innovation in Education (TIE) offices. Scissors, pencils, play-doh, alligator clips, rubber bands, laptops, and rulers littered the table. The seminar gave an introduction on how to use Makey Makey.

“Makey Makey is really very versatile; they are double-sided. On one side they can basically function as a keyboard, with keys, mouse, and spacebar. One of the tutorial videos showed how a flight of stairs can function as a piano, with each step being a different piano key. On the flip side, there are more inputs and more options, where you can do more high-level coding,” explained another organizer, Julie Erickson.

The teachers even built working prototypes of their own ideas. Many of their prototypes solved problems they face in the classroom daily. Other seminars were able to create prototypes for a communication tablet for nonverbal autistic children, a map of stars that spoke the name and information of the star when each one was touched, and a talking analog clock that gave the time when touched.

Dave Swank, principal of Canyon Lake Elementary, was brainstorming uses for Makey Makey before he even left the training session. As an educator, he tries to instill in his kids the importance of helping others while remaining safe and aware of strangers. He found a way to walk this line through Makey Makey. He and third grade teacher Carrie Baker brainstormed a system where a keypad could be put outside classroom doors and all students are given the password. To get into a room, they must type in this number on the keypad. If correct, a certain noise will sound in the classroom and a student can open the door. If incorrect, a different sound will emit, letting the students know not to open the door. With Makey Makey, kids and educators can work together to solve real world problems.

“Canyon Lake’s campus is unique in that we have two main buildings, so there are lots of kids moving back and forth. We’re trying to find a way to reinforce politeness and helpfulness while also staying safe. We came up with a color-coded keypad system so kids known when they can open the doors,” explained Swank.

In today’s world, especially in South Dakota, it is important for kids to learn about programming, robotics, and computers. Tools like Makey Makey introduces coding concepts to them in an enjoyable and easy way. As educators are increasingly understanding, the job market is headed full-force towards computing.

Want to learn more? A Makey Makey training manual for educators is available at makeymakeyk12.com.