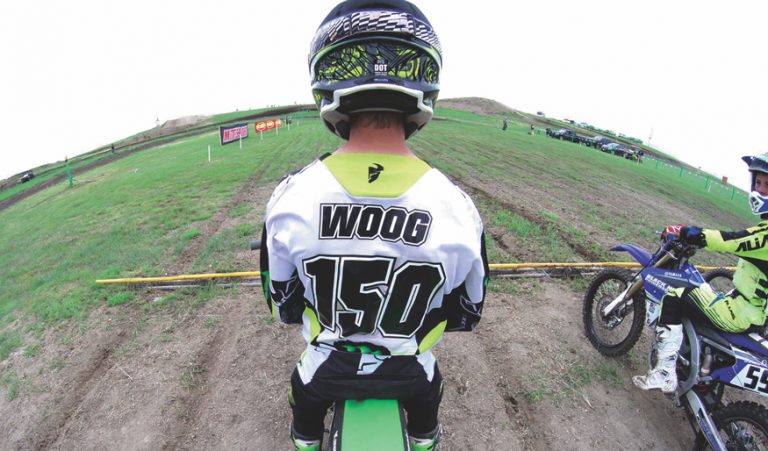 The Blink of an Eye

The blink of an eye is all it takes and life as you know it can change.

“I can still see the wreck when I close my eyes and hear the doctor say, ‘He is not going to survive.’”
Randee Wasserburger

The world of motocross has been a central part of the Wasserburger family since Ward Wasserburger was a child himself. Racing took a back seat as he built his adult life, but after he met and married Randee, the couple left their home and business in Chadron, Nebraska and moved back to the Black Hills in 2008 where motocross again emerged at the center stage of their lives. 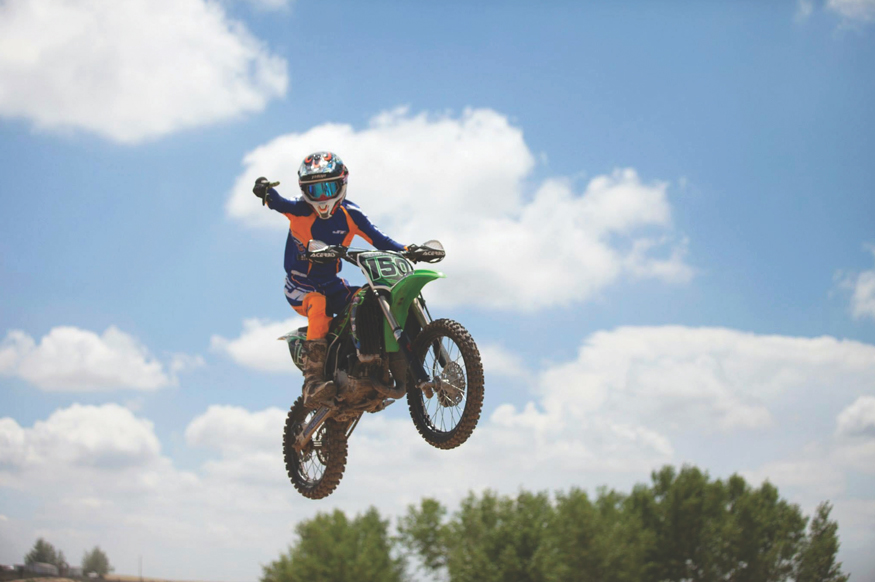 Racing quickly became a family event, Ward and Randee loading up all five “Burger kids” and hauling off to watch Joel compete all over the region. “It was pretty much every weekend,” Randee says with a warm smile. The family grew closer during those trips, often with a friend along for the ride, enjoying the laughter and chatter from the back seats.

Jace adored his older brother Joel and was just three years old when he took up the family sport. “He’s a daredevil,” his father says, and a natural, earning the nickname “Woog” because “Jace is always going,” Ward laughs. He was 15 years old and had been racing for just four years when the family set out for the SDMA (South Dakota Motocross Association) registration race in Sturgis, South Dakota on Father’s Day of 2015.

Jace’s bike wasn’t running quite right, but he lined up anyway for his first race of the day. It was the first jump on the first lap that changed the Wasserburger family forever. The bike cut out while Jace was in the air, some 25 feet above the jump, and bogged, pitching Jace forward over the handlebars. His head hit the hard-packed dirt first, and the 160-pound bike came down on top of him. He was immediately rushed by ambulance to Rapid City Regional Hospital where the Wasserburgers first began to understand the severity of the damage.

The ER doctor told the family that Jace’s brain had a couple of “bleeds” on it, but they could be fixed. After the neurosurgeon examined him, he gave Ward and Randee the devastating truth of the situation. Jace didn’t have a couple of brain bleeds – he had hundreds; and complicating matters further, he had suffered brain shearing. Like when you drop jello on the ground, the doctor explained, it shakes and it breaks. The surgeon told the family as gently as possible that from his experience, patients with these injuries don’t make it.

Within a couple of hours the motocross community back at the track in Sturgis heard the news. Track personnel canceled the race and nearly the entire motocross community packed up and headed for Rapid City. They gathered in a family waiting room, some kids still in their racing gear, and they prayed. A family friend set up a Facebook page – Prayers for Jace Wasserburger – and thousands added their loving thoughts to the chorus.

Doctors explained Jace’s body would handle the injury in the same way it handled a bruise; the brain would swell, hit a peak and then go back down. As long as the pressure didn’t stay high for too long, there was hope. A bolt was inserted into Jace’s skull to monitor the pressure and for the next several days everyone watched and waited. Jace’s brain did swell some, but the pressure never stayed too high.

The Wednesday after the accident was the first good news – Jace was breathing along with the respirator indicating he wasn’t brain dead, and the Wasserburgers were told there was a 99% chance he would wake up. But, doctors cautioned, he would need a tremendous amount of care and therapy Rapid City Regional wasn’t equipped to provide. They encouraged Ward and Randee to talk about rehab facilities and suggested one in particular: Craig Hospital in Denver, Colorado. 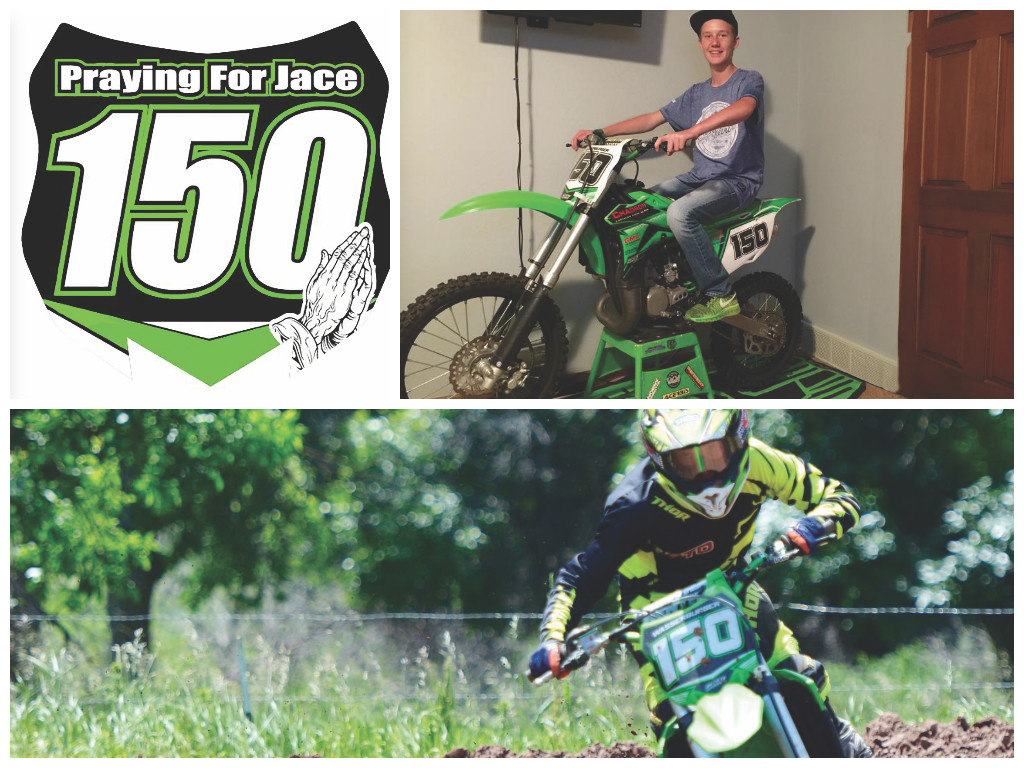 On Sunday, June 28 – exactly a week and five minutes after the tragic accident – doctors backed off the sedation medication and Jace Wasserburger woke up. Many in the motocross family were gathered in the hallway waiting while hospital staff removed the breathing tube, and when the doctor asked Jace what they called him on the racetrack, the whole crew heard his weak but enthusiastic response: “Woog!”

“We thought he was going to be fine,” Randee says of the memory. “We didn’t know then that he wasn’t going to remember.” Jace’s brain had suffered a lot of damage and while his survival alone was a huge step forward, they weren’t out of the woods yet. It didn’t deter the Wasserburgers, though. “We didn’t care if we had to change diapers for the rest of his life,” Randee says, her eyes misting, “we just wanted him.”

In the early days of August, Randee flew down to Denver to join Jace at Craig Hospital and there they began the long road to recovery. Jace was assigned a full team of medical professionals devoted to his recovery, but they were cautious with their optimism. He couldn’t stand, he couldn’t walk and he couldn’t remember. They were told it would be three months minimum and no one knew how much anything might change. The Wasserburgers prepared for the reality of bringing Jace home in a wheelchair.

In true Wasserburger style though, Jace shocked them all. In August of 2015, just 10 weeks after starting rehab and only two months after the accident, Jace came home – unbound to a wheelchair. “Wow,” Dr. Monasky of Rapid City kept saying when he saw Jace the first time. “Wow. God has special plans for you.”

Now, less than a year after the accident Jace is not fully recovered, not by a long shot; but, his parents say with a grin, he certainly has his personality back. The family has taken it upon themselves to continue his therapy – with the help of Dr. Kim at Bahr Chiropractic Wellness Center – even after the insurance money ran out; and with their undying support, he’s gotten back to school through a home-bound program with Stevens and passed the test to drive again with flying colors.

He desperately misses his motocross days, but his brother and his friends make sure he doesn’t miss out entirely; Jace attends practice and race sessions, taking photographs and cheering everyone on. “He’s really more worried about other people,” Randee says. “He’s just this incredible kid with this huge heart and resilient spirit.” “If you didn’t know Jace,” a family friend commented, “you wouldn’t know anything is wrong.”

While no one knows what Jace’s future looks like, for the Wasserburgers, it doesn’t really matter. A photo taken in October of 2015 hangs above the fireplace – a stunning sunset silhouettes each of the seven Wasserburgers, standing together on a ridge, holding hands. Randee nods at it, choking back tears. “It just wouldn’t be the same if that kid weren’t in there.”