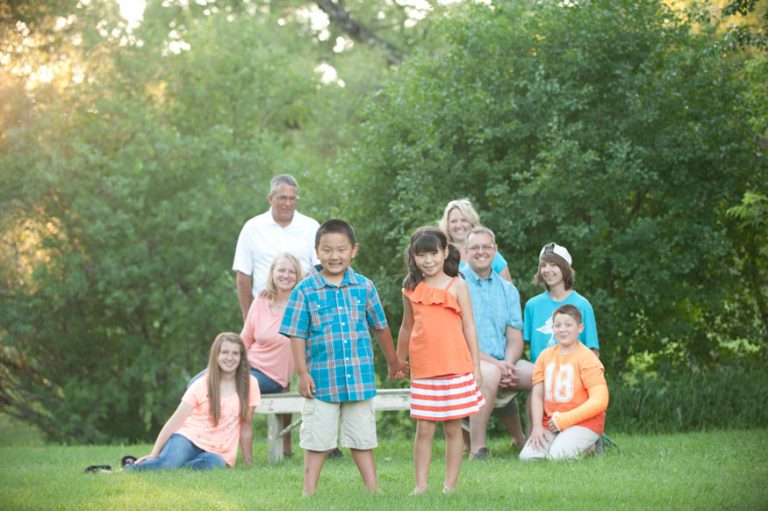 The Oylers and The Barnes

Neither Clint and Amy Oyler, nor Jeff and Stacy Barnes knew much at all about Korea, but that small nation is where the magic that brought them together really began.

Nineteen years ago, in July of 1994, Amy was working in the Rapid City Regional Hospital daycare center when a co-worker asked her if she was dating anyone. Amy told her no, and the woman’s response was simple and straight to the point: “Good. You can date my brother.” Eleven months later Clint and Amy were married in her hometown of Alliance, Nebraska and began their life together in the Black Hills of South Dakota.

After nine years of marriage and two sons—Eli and Ross—they found out they were pregnant again but there were complications and Amy nearly lost her own life giving birth to a stillborn baby girl. The couple was devastated. Clint said they would have no more kids; instead they focused their energy into building a house. But Amy knew there was something more for them. “I knew we were supposed to have another child, a girl,” she recalled their devastation. “And we didn’t. Now what was I supposed to do? She was the missing piece of our family.”

Stacy Barnes knew that feeling all too well. She met her husband, Jeff while attending school in Wall, South Dakota in the summer of 1994; and about a year and a half after their first date; they were married in December of 1995. Six months later they found out they were pregnant with their first child, Brittany. Their joy turned to concern when Stacy discovered a mole growing on her back. It was removed a month after Brittany was born, and the news was not good; it was cancerous, and thought to be brought on by the hormones associated with pregnancy. Stacy was advised not to have any more children and for the next year she struggled with health issues.

When her job as a nurse brought them to the Black Hills, Jeff took a position teaching math at Stevens High School and the couple settled in to make their home in Rapid City. As time passed, Stacy grew healthier and healthier, and so did her desire for more children. The couple explored their options through some of the adoption agencies in town, but were not sure they were comfortable with the process. Stacy remembers feeling discouraged, “We thought we wouldn’t have any more children.” During this time her mother called and shared the news of a family with roots in Wall that had just adopted a child from Korea and gave Stacy their phone number. Stacy called the family that night and was referred to a social worker with an international adoption organization, the same woman, incidentally, that was also working with Amy Oyler.

“We were standing on the hill at sunset,” Amy remembers, smiling at Clint. “And I asked him ‘So, on a scale of 1 to 10 where are you with adoption?’ and he said ‘I’m not gonna tell you.’” Amy knew then that he was on board. They filed their papers in September of 2004, requesting a little girl, knowing it would take longer. They waited for 18 months. “You start praying for a baby that hasn’t even been conceived yet,” Amy remarked. 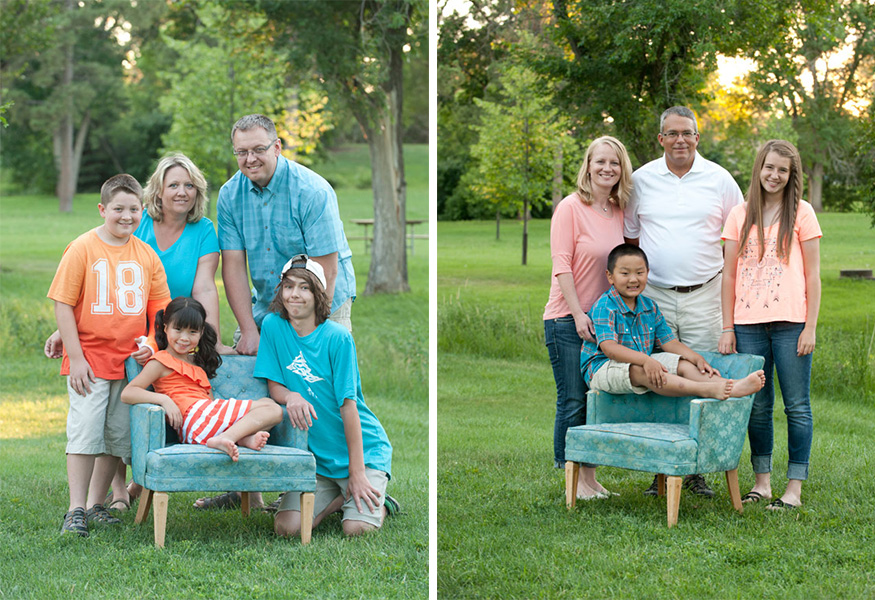 In the fall of 2005, a local international adoption group hosted a picnic. Their social worker introduced the Oylers and the Barnes to each other.
After talking, the couples realized they might get their referrals—the call to say they had been matched with a baby—at about the same time. Little did they know, those referrals would come on the same day. Late in December of 2005, both families got the call.

The Oyler baby had been born, but she was missing her right ear. “When they called, they asked us if we still wanted her,” Amy remembers. “That’s when I knew she was meant to be our baby.” She smiled at her husband again, “Clint’s brother was born without the same ear.”

Stacy’s call came while her husband was on Christmas break so he received the news before her. Jeff called her immediately to share the good news, but he got her machine. He left a message, “You’re a Momma!” She was in surgery when she got the message, left the room crying, and called immediately to get all the details. Stacy wondered if the Oylers had also gotten their referral. That suspicion was confirmed when she called Amy; and the congratulations and celebrations began for both families.

All they had to do now was sign the last of the paperwork, which was on its way being shipped overnight from Korea. It was December 31st and both families were waiting anxiously for the first pictures of their babies when they got word the flight bearing the documents had been grounded in Omaha, Nebraska because of a blizzard. It was frustrating news. Then a little New Year’s miracle occurred. The head of the local FedEx in Rapid City called Stacy to tell her that he had made sure their paperwork would get here. The paperwork for his own baby was on that flight.

Both families remained in close contact and as spring came to the Black Hills, they got their travel calls. “It was March 14th, 2006, and it was Tuesday,” Jeff remembers. “The Omaha office called and told us the babies would be in Denver on Friday.” An excited Stacy called them right back to see if the Oyler baby was coming in too. They said yes. Their babies had been born on the same day, in the same country of Korea, and were now coming to their same forever homes in Rapid City, South Dakota, on the same day—and on the same flight! The connections could not have been more.

That Friday, St. Patrick’s Day; March 17th of 2006, the Oyler’s met their daughter, Evie; and the Barnes met their son, Parker. Both babies were four months old. “You never
stop worrying until they put that baby in your arms,” Stacy said, and Amy agreed.

The whole experience was positive and powerful for both families. They still stay in touch, meeting once a year at least to celebrate “Gotcha Day” or “Airplane Day” as they call it. 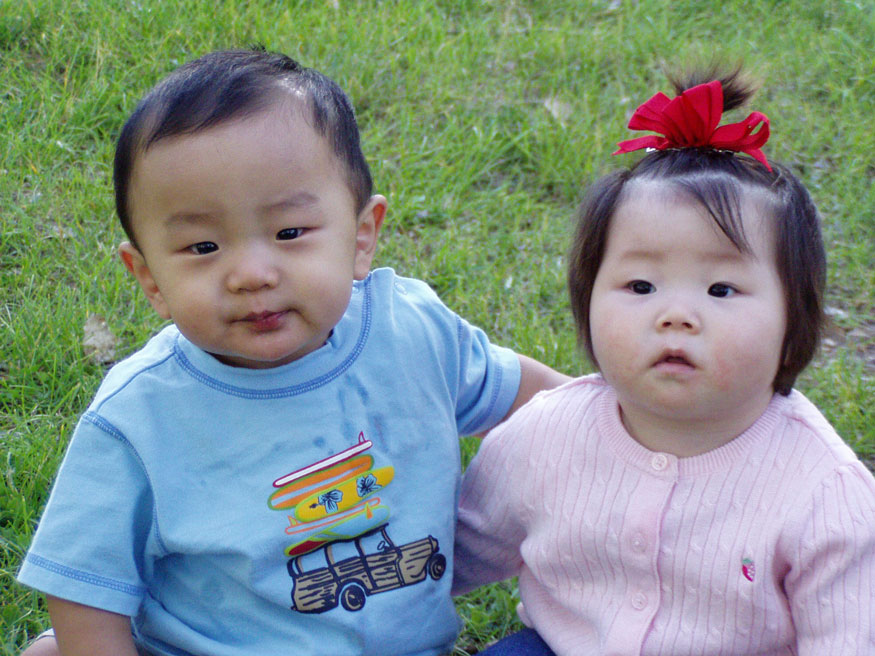 “In some ways it’s not any different,” Jeff says: “I forget he’s adopted. He and Brittany still fight, I still catch myself thinking, ‘Parker had better not eat too much salt, I have high blood pressure’ or whatever, and then realizing it doesn’t matter.” The whole group laughs and Stacy agreed, adding, “Adopting Parker opened our eyes to all the ways you can have a family. I feel like part of the reason I got sick was so we would get him. We never would have done this if it weren’t for that.”

Because of Amy’s history in childcare, she shared, “I worried it would be like having another day care kid in my house. I mean, I love my daycare kids, but not like my own. But it wasn’t like that at all. God truly prepares your heart once you decide to adopt and when you get that first picture…” she said, shaking her head and smiling, “it’s a done deal.”

Now, Evie runs up to her mother just as she is finished speaking and offers a bite of her ice cream cone, reminding Amy of the way her daughter described the adoption. “Evie said, ‘Mom, are you sure God told you to adopt a Korean girl?’ I said ‘Yes.’ And she said, ‘It’s like God wanted you to have two cupcakes with sprinkles (referring to the Oyler’s sons) and one with glitter.” Amy nodded, “Yep, that’s about right.”