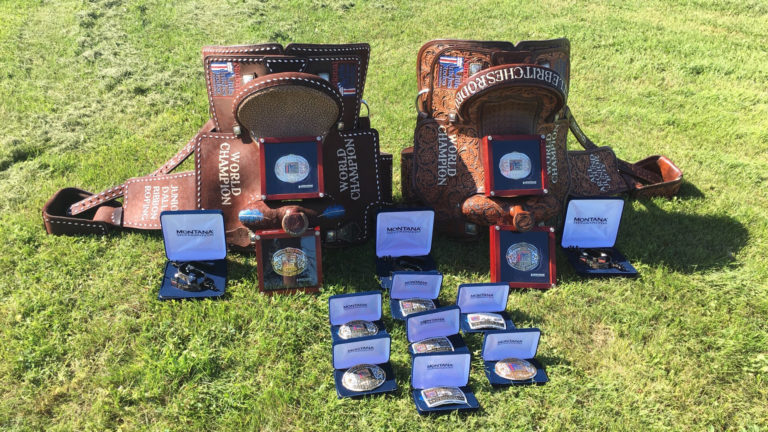 Last December, we introduced you to Amazing Kid Trevor Hartshorn, who was making a name for himself on the rodeo circuit. Trevor, who will be a sophomore at Custer High School this fall, spends most weekends from March to October competing in rodeo events for high school, 4-H, and the National Little Britches Rodeo Association.

After narrowly missing out on a victory in the Flag Racing event during the 2017 World Championships, Trevor bounced back the following year, earning several prize buckles and spurs, as well as a $1,000 scholarship and the title Champion World Junior Boy in Flag Race. Most people would be content with these accomplishments, but Trevor set his sights even higher. Following his successful 2018 showing, he announced his intention to win the Junior Boy All-Around saddle in the 2019 National Little Britches Rodeo Association Finals.

Earlier this month, he did just that, securing not only the Junior Boy All-Around saddle, but a Junior Ribbon Roping saddle (with partner Gabe Glines) to go along with it.

If you think Trevor’s success inspired automatic confidence, he’s the first to declare that was not the case – especially in an event that attracted top-notch talent from around the country. “I didn’t feel confident at all,” he admits. “I wasn’t even listening when they called my name. It caught me off guard.”

Scores were tallied by looking at each contestant’s five best rodeos of the season and adding up points in all the events. Trevor ended up winning the title by 14 points – a testament to his hard work and determination, as well as the overall talent he was up against. Just under 1,300 total contestants participated in the 2019 National Little Britches Rodeo Association’s World Championship.

Not only was the competition fierce; Trevor also had his own past success to live up to. “Coming back from being a World Champion in the Flag Race last year was probably the toughest challenge,” he says. His advice to other aspiring young rodeo competitors looking to take their talent to the next level? “Keep trying!”

Never content to rest on his laurels, Trevor intends to heed his own advice and keep trying himself. He’ll be competing as a Senior in the Little Britches Rodeo Association next year, and will continue participating in high school rodeo. College is still on the horizon, too; ultimately, Trevor hopes to turn professional someday, focusing on team roping and calf roping.

There’s no need to convince his family of his seriousness. When Trevor sets out to get something done, he makes it happen.