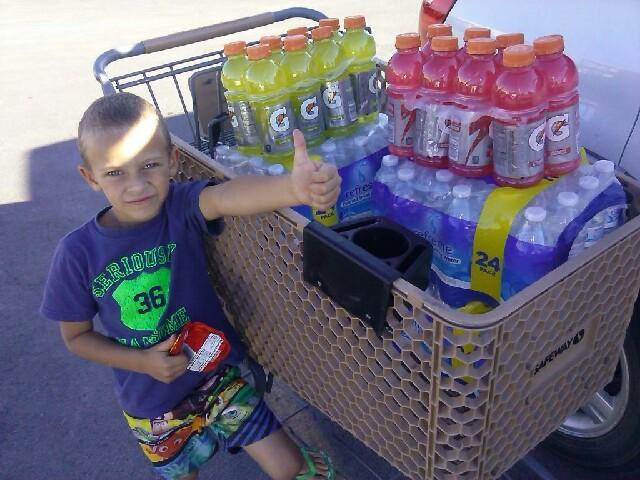 SPEARFISH | A heart to serve is evident in the life of a young man who would someday like to follow in the footsteps of his father, Cody Griffee. Mason is just five but he already has figured out how best to achieve his goals. This time, he decided the goal was to bring water and Gatorade to the firefighters and supporters who were working in the heat on Crow Peak, fighting a fire caused by a lightning strike on Friday.

Mason set up a lemonade stand in the heat of the day, striving for enough funds to buy a grocery cart full of those precious liquid commodities that help to keep a firefighter going.

Circumstances on Crow Peak have not been the easiest for those involved, especially those with boots on the ground. Mason wanted to make sure that those working so hard did not go without, at least something that he could provide.

With the funds raised he purchased a cart of water and Gatorade, and a candy bar for himself. He then took those items, minus the chocolate, to the Spearfish Fire Department where he left them in the care of those who could disburse them.

Cody is proud of his son and his effort. Not everyone that is just five years old can look at life, see a need and strive to fulfill.
“He just wanted to help,” said Griffee of his son. “This was the way he decided to do it.”