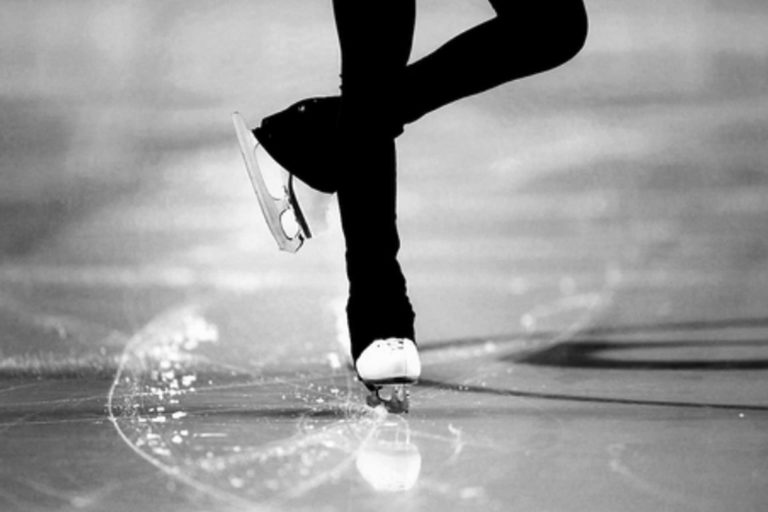 As far back as the 13th century, the Dutch would ice skate on frozen canals to travel to other villages. The sport eventually spread to England and then to the rest of Europe. Today, two girls in the Black Hills are spinning closer and closer to their goals for gold.

Lauren Eccarius (17) and Alex Rogers (17) are both seemingly normal high school students; they are excited to go to college and spend a lot of time doing homework and volunteering. But these teenagers are far from average. Both girls are the only skaters from the Black Hills to earn the distinction of being double gold medalists. Only one percent of US Figure Skating members reach that level, and these incredible teens did it before graduating high school.

Similar to the belt test structure in karate, US figure skaters advance through different levels based on skill tests. Once a skater passes their gold test, it is a huge accomplishment. To become a double gold medalist, a skater must pass another gold test.

Alex and Lauren both began skating at about five years old, and lived in the same neighborhood so they shared rides and quickly became friends. They’ve progressed together over the years and both have goals of performing on Disney on Ice later in life.

“Alex and Lauren were both very driven, so they went to competitions together when they were younger. They traveled to shows together to places like Wyoming and Minnesota,” said Lauren’s mom Alison Eccarius.

Two years ago, Alex moved from Rapid City to Colorado Springs so she could be close to world-class coaches and in a more competitive environment. She skates four hours a day working with four different coaches.

“When Alex was young, it was primarily a recreational activity, and I thought families who picked up and moved for a sport where insane. And now here I am,” said mom Chris Rogers from a mall in Colorado Springs. “I laugh about it, but when you see your child has the talent, drive, motivation, and willingness to sacrifice a normal schedule, then you are willing to sacrifice right along with her.”

She starts school at 7 a.m., and she gets to the ice rink at 1 p.m.–training for a couple hours. A few times a week she does an off-ice workout that includes cardio and weights, and to improve even further, she does yoga, physical therapy, and dance. Sometimes Alex isn’t home until 7 or 8 at night.

“It’s been an adjustment, because the days are long for her. She gets up early and doesn’t get home until late, so I worry that she’s getting enough sleep and has enough time to do her homework. But, I feel like other parents have the same worries about their children. Figure skating is an aesthetic sport, so you’re always worried about how your kid is feeling about themselves. There is always pressure to have a certain look, and you just hope you taught your kids to love themselves and to blow off any criticism about it. It’s a very stressful activity to be in, especially at the level she is competing at.”

Alex has her hands full for the time being, but she plans to continue training as much as possible and go to college after graduating. She loves math and science, so college is a big goal for her.

Closer to home, Lauren decided she wanted to stay close to family and friends in Rapid City. She is a junior at St. Thomas More High School and stays busy with school work, researching colleges, and her rigorous training schedule.

While she didn’t move to Colorado, she goes down to Colorado Springs for one week every month. Like Alex, she skates four hours a day with four different coaches.

A couple days per week, she’ll get up at 5 o’clock in the morning to skate before school. She also skates everyday after school. There are no coaches here advanced enough to keep up with her, so if Lauren needs help, she sends a video to one of her coaches in Colorado.

“She always has a lot of makeup work when she gets back, and it’s a lot of driving,” said mom Alison. “But I absolutely could not be more proud of her. She has always wanted to go. I’ve never had to make her go to a practice. She is very self motivated and dedicated to improving herself. With all the work she has put into it, it will pay off in a lot of ways beyond skating.”

She’s been told that she has opportunities with Disney on Ice and with an ice show that travels through Europe. But for now, she’s just focusing on spending time with her family and friends and keeping up with her busy schedule!

Val Simpson got into skating with her daughter, Joelle, by taking Learn to Skate classes offered by the city. Now years later, Joelle has been skating seriously for two years and Val is the President of the Black Hills Figure Skating Club. Alex was in Val’s first skating class nearly a decade ago, and while Val was flailing around, young Alex was gracefully skating circles around the other students.

“It’s been fun to watch her progress over the years,” Val said.

The club has about a dozen skaters, as well as three coaches who primarily help the advanced skaters. It was founded right after the Roosevelt Ice Arena was built in 2001.

Kids who are interested in figure skating start by taking Learn to Skate classes offered by the city. After a two to three years progressing through the classes, serious skaters can consider joining the Black Hills Figure Skating Club. Club members can skate more regularly as well as take private lessons with the coaches.

Once girls turn 14, they can start helping teach the Learn to Skate classes. Club skaters routinely perform at Rapid City Rush hockey games during intermission, at Main Street Square, and at exhibitions. Last spring, the club participated in “Disney Princess Night.” Actresses from Los Angeles performed as Disney princesses while skaters twirled and jumped across the ice.

“Our skaters felt like princesses too, because it was the largest audience that most of the had ever performed for,” Val recalled.

The club has five one-hour sessions of ice time throughout the week, but skate schedules can be as rigorous as the skater wants. Some skaters even practice at 6 o’clock in the morning to get more ice time!

“There’s definitely a commitment. Some girls skate over eight hours a week,” said Val. “It’s a very physically rigorous sport but it is also artistic. The girls that are good skaters are also good skaters, and they usually have some dance in their background. There are a lot of artistic elements that are put into a performance. The skaters make it look so easy, so people watching have no idea how complicated the moves are.”

Each February, Rapid City hosts the Black Hills Gold Rush Competition. The last competition drew 75 skaters from North Dakota, Wyoming, and eastern South Dakota. This year had almost twice as many skaters as 2016. The club is hoping that the 2018 competition will attract even more regional skaters.

There are Learn to Skate classes that will start right after the beginning of 2018. Register for classes online at the Ice Arena Division of the city’s website.

“The more ice time the child gets, they’re going to progress a lot quicker,” advised Val. “I’m so proud of Lauren and Alex for reaching the level they’re at and being the first ones in the Black Hills to be double gold medalists. They’ve worked towards their goals for over 10 years now and it’s required a lot of blood, sweat, and tears. They give the other girls in the club something to look up to.”

The best figure skaters from around the world will show off their moves at the upcoming 2018 Winter Olympics, held in PyeongChang, South Korea. From February 9 to 25, 2018, figure skating at the Gangneung Ice Arena will captivate the world.