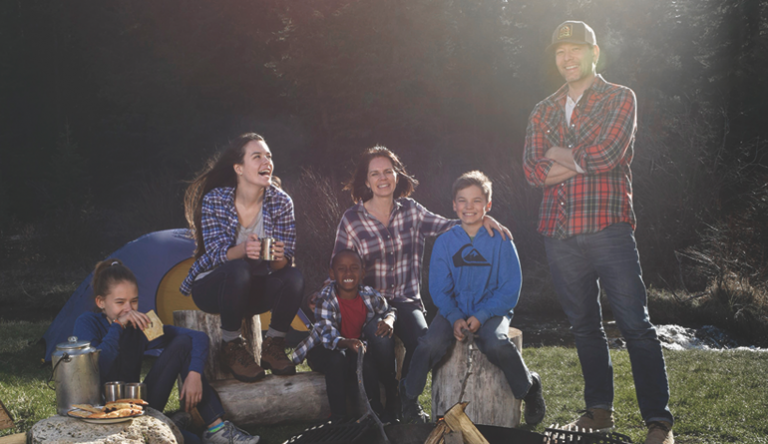 One local couple makes a difference for an Ethiopian boy—and for the rest of us, too, thanks to a growing trove of Black Hills coffeehouses.

Aaron Neiman doesn’t like labels—he finds them “confining.” He and his business-partner wife, Tina, also don’t like convention—they’ve made their biggest life decisions from the gut. Once a trajectory is set, however, Tina’s business-administration degree and Aaron’s attention to creative detail help them to navigate a multi-venue enterprise featuring the essence of life: coffee.

So, let’s set the stage: Harriet & Oak, the new coffeehouse on Main and Fourth Streets in downtown Rapid City, just opened this spring. It joins Blackbird Espresso in Spearfish, two Green Bean Coffeehouse locations, in Spearfish and Belle Fourche, the 8th Avenue Bakery, also in Belle Fourche, and the drive-through, seasonal Riverbend Coffee Company kiosk in Hulett, Wyoming. Factor in four children, two dogs, and one cat—along with a mild passion for geocaching and camping—and the average parent would collapse on the couch. And place a pillow over his or her head.

Is it the caffeine that gets them through?

Yes. But there are also more subtle forces at work.

After talking with the couple—who don’t much relish talking about themselves—it becomes clear that their lives are about intention, consciousness, family, and good health. They’re not “foodies,” but they like healthy savories. They’re not “bakers,” but they appreciate pure ingredients and scratch-made sweets. They’re not “globe-trotters,” but they like travel and adventure and change. They’re not “entrepreneurs,” but after getting married, they “knew that someday they’d like to own their own business.” Then, one day the first Green Bean (originally The Tin Cup) was offered for sale in Belle Fourche, and the adventure began. They didn’t mean to have a coffee empire. It just happened, one store at a time.

Meanwhile, the Neimans also started their family. Somewhere along the way, they shared a back-burner thought that adopting a child in need could be a possibility, but they didn’t go looking for one. They didn’t set out to become “a family with a kid from Ethiopia.” It just happened.

That’s a whole other story. 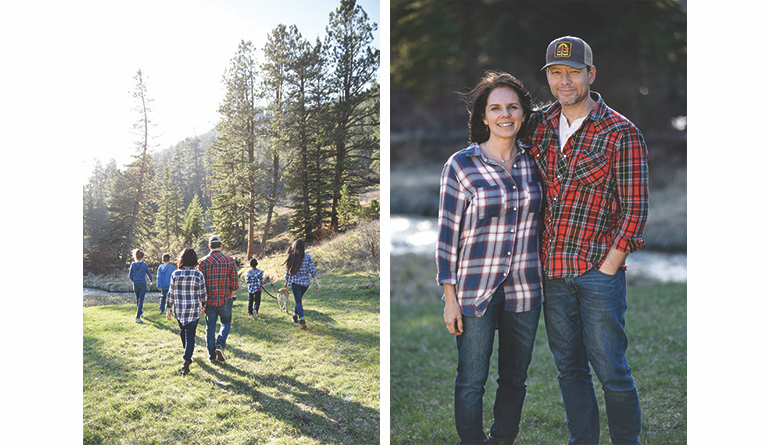 Tina was born and raised in Rapid City; Aaron is from Hulett. He put his “toe in the coffee” with a job at Common Grounds in Spearfish, until Tina’s career sent them, two parents and two daughters, on a detour to Hawaii—for training in Teaching English to Speakers of Other Languages (TESOL). While she was studying, and trying out that field, Aaron quickly climbed the ladder at Starbucks. He rose to store manager, and in the process learned about “corporate coffee.” Their third child was born in Hawaii—Aidan calls Hawaii “his country”—and then they returned to South Dakota and their extended family.

The coffee empire was just beginning, with only one location, when they sponsored an Ethiopian child. They heard about Look Development—a Christian-based nonprofit NGO (non-governmental organization) “run by Ethiopians to serve Ethiopians”—from its founders, who live in Montana, of all places. Aaron and Tina loved the idea of putting a child through school and assisting with medical or support needs, and then leaped at the chance to go with Look Development on one of their regular trips to Ethiopia. There, they met their sponsored child.

“We were broken, on a real visceral level,” Aaron recalls. “That little boy’s situation was not good. Although our sponsorship ensured that he could go to school, his home life was very sad. So, we pursued the option of adopting him.”

Tina was homeschooling at the time, and she agrees that the experience of seeing these children in need brought a “background thought to the foreground.” Unfortunately, the adoption process did not work for the Neimans’ sponsored child, but they were not deterred. In April 2011, they connected with an agency that worked with an Ethiopian orphanage; by Christmas, they had a referral.

“We wanted to maintain the birth order in our family, and we had two daughters and one son, so we were looking at two- to three-year-old boys,” Aaron says. In the first group of referrals, there were four girls and one small boy who had not been placed. Although the Neimans could have continued with the process, and reviewed the backgrounds of other children, they just looked at Luca—there on the computer screen—and said “yes.” “There aren’t any easy answers for how we decided,” Aaron says. “We didn’t want to over-think it. We wanted to adopt him; that was in our hearts. It was just right. He was the right kid.”

After one quick trip for Ethiopian paperwork, then a four-month wait in the United States for American paperwork, Luca was ready to come “home.” The Neimans decided that if Luca would learn about America, then they had better learn about Ethiopia, so they piled the whole clan into an airplane for a two-week acclimation process. “Meeting a child under these circumstances is not a Hallmark moment,” Tina says. “He wasn’t even three years old, and we didn’t speak the same language. We didn’t come in all weepy and huggy; we kept it really low-key. To this little person, we were just some strangers, some foreign bodies in his life.”

The newly minted family hung out in a guest house, made friends with other kids in the neighborhood, became familiar with the sights, smells, food, and culture that would forever be part of their lives, and for the first time truly understood what it felt like to be minorities. “We wanted our other three kids to have a sense of what it would be like for Luca to be ‘different’ in South Dakota,” Aaron says, “and for all of us to know what ‘his place’ was like.” 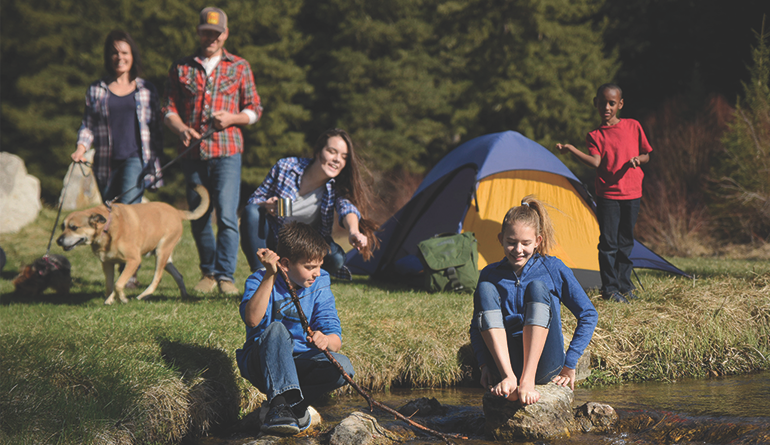 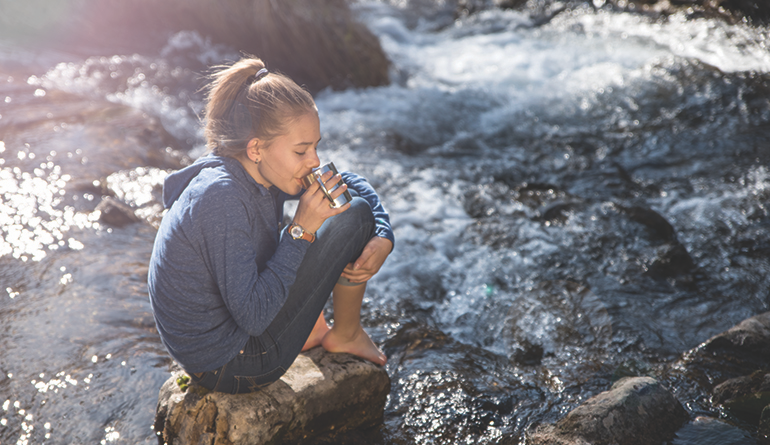 The rest is history. Now the newest member of the family is “Harriet,” as they casually refer to the newest coffee business. In describing the Neimans’ business philosophy, Aaron is forced to display his knowledge of coffee history—all the while apologizing for sounding uppity.

The waves refer to how coffee has “filtered” its way into coffee makers, freeze-dryers, French presses, cold presses, and pourovers around the world. In fairness, there was actually a “pre-wave” period, too—where historical trade logs show evidence of coffee as a commodity as early as the 15th century. But the conversation usually starts in the 1800s, when coffeehouses were popular gathering places and coffee was slated to become one of the world’s largest traded resources. “First Wave” entrepreneurs saw the potential market for providing the average household with affordable, ready-to-brew coffee—and as the 20th century rolled out, vacuum-packed beans, instant coffee, and the first drip coffee makers changed the way coffee was seen, sold, made, and drunk.

The “Second Wave” involved mass production and distribution—along with the first “specialty” coffee beans. People came back out of their kitchens and into the shops, where pre-ground coffee, as well as brewed, mixed drinks became common. The Second Wave gave birth to Starbucks and other chain stores—and enthusiasts became accustomed to a wide range of syrups and drink choices. Second-wave stores like the Green Bean Coffeehouses offer a smorgasbord of choices.

“The Third Wave is more of a return to the basics—purity, single-origin coffees, a more focused menu,” Aaron says. Both Blackbird Espresso and Harriet & Oak are Third Wave. “We make everything from scratch,” Aaron says. “We made a conscious decision to crack eggs and use them in burritos. We make our own coleslaw, kimchi, and falafel from dried chick peas. We’re trying to blend slow food into a fast-paced environment, and provide really good quality at a decent price.”

Meanwhile, the bakery isn’t about waves. It’s about sugar. It’s the place that grew from an idea to bake bread for the farmer’s market into the launching pad for most of the food sold in the various locations. And on Saturdays, lucky Belle Fourche residents can sit down with warm doughnuts.

Anyone who knows the Neimans sees them baking, cooking, cleaning, doing bookwork, and planning menus. In a few short years, they’ve created comforting, familiar stops on our daily routes—mini staycations, filled with scratch baking. But when no one’s looking? They run around outside, walk the dogs, hike, camp, and GPS geocache coordinates. Just like the rest of us. 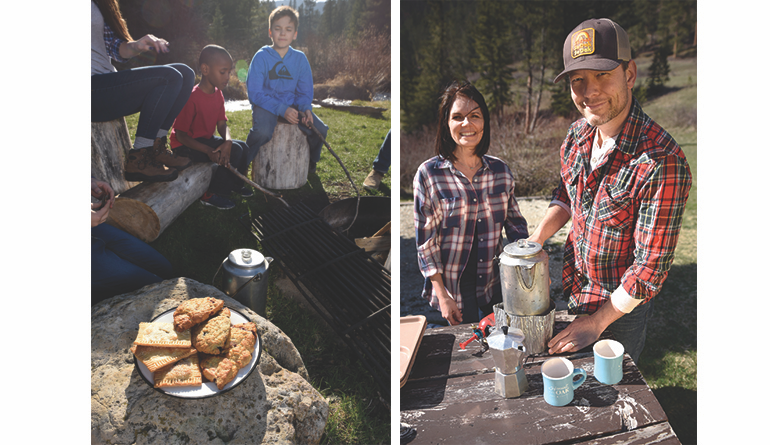 Aaron:  An Ethiopian pourover and a blueberry lemon zest scone (from both Blackbird and Harriet)

Tina: While my mind works well with numbers, what I love about the coffee shops is the atmosphere, the creativity. And I love the menu.

Aaron: If I’m passionate, it’s in creating environments where people are comfortable, the food and drinks are approachable.

Aaron: Our marriage philosophy is “Do what you’re good at.” (Sorry, honey, but) I’m a better cook, and I work on the creative side, but I’m not good at the business part. We don’t care about traditional gender roles. The business is not sustainable without Tina.