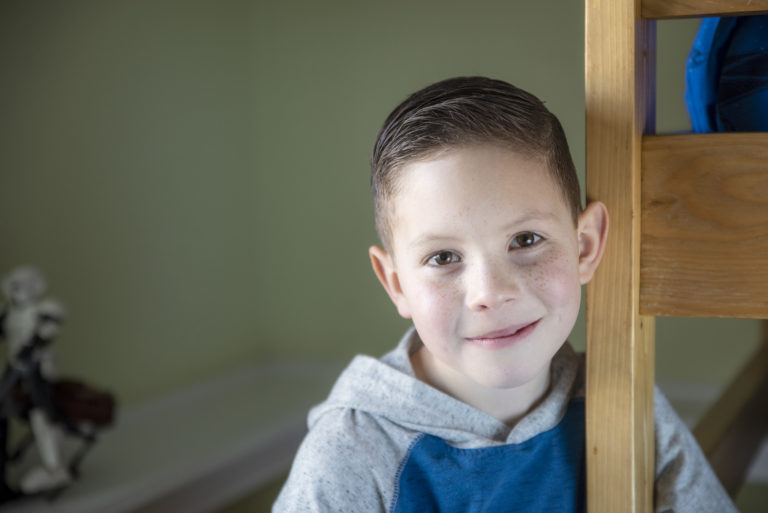 Be ready for a giant hug if you get the opportunity to meet Grayson Chapeau – an 8-year-old boy from Spearfish who is inspiring adults and making a difference in peoples’ lives across the region.

Grayson is your typical boy. He loves to play with his cars and Legos®, runs around the house with his four other siblings, and has a love of math which he will proudly tell you about.

However, there is something special about this boy — a light of positivity that radiates through him. And it’s even more impressive when you hear about his medical journey.

It was September of 2014 and this rambunctious four-year-old had been dealing with what doctors believed was a rare bacterial flu. Vomiting was persistent for weeks, and the energetic guy was so lethargic he could barely stay awake to get ready in the morning. But, the mystery remained because bursts of life would come and go.

One morning, Chelsey, Grayson’s mom, was getting Joshua and Saray (the oldest twins) ready for school. Grayson seemed non-responsive after falling back to sleep halfway on the couch. Little did they know, Grayson was fighting for his life.

After a long visit of tests at the Emergency Room, the doctor suggested a CT scan.

“I wanted to know what the answer was, and I wanted to know how we could fix him,” Chelsey says as she relives the night that changed their lives. “But, I was praying it wasn’t something major. Strep? Mono? So much easier to deal with.”

When the doctor got the results, it was apparent something as simple as strep or mono was not the case. Grayson had an immense amount of pressure on his brain and his life flight to Minneapolis Children’s Hospital was on its way.

Jeremiah – Grayson’s dad – flew with him as Chelsey scrambled to pack and find help for her other two children at the time. Her mom dropped everything to help and family, friends, and neighbors were right alongside her.

“Having the community and family here… it was overwhelming and humbling all at the same time,” said Chelsey.

In Minneapolis, the Chapeau family would soon find out that Grayson had an inoperable tumor in the center of his brain – diffused astrocytoma grade 2. This little boy was about to undergo six weeks of radiation for five days a week, chemo therapy for over a year, all in addition to a targeting drug to stabilize the tumor’s growth.

Back and forth, the family went from Spearfish to Minneapolis. The community was raising awareness and support for the family, and that is where the pop tabs made their appearance.

A neighbor had asked Chelsey to take a bag of pop tabs to the drop off location in Minneapolis during their next visit. Kindly obliging, Chelsey said yes, but Grayson had questions. What were they used for?

Since 1987, the Ronald McDonald House Charities has been collecting pop tabs which get recycled and earn money to fund the houses available for families going through their own medical journey. These houses are a “home away from home” as families travel back and forth for appointments, all at no expense.

“It’s a lot of money to stay at hotels,” explained Grayson, “and the pop tabs make the charity money when they recycle them.”

The RMHC in the Upper Midwest have helped over 6,500 families and the pop tab program has helped raise over $800,000. Learning of the program’s impact, Grayson was on board. His first year collecting tabs, he had 88 pounds. That grew into a goal to raise 100 pounds the following year. With schools, businesses, and the community behind him, Grayson was able to bring 433 pounds to RMHC-UM.

Grayson transferred hospitals and is now seeing professionals in Denver every three months. Continuing his pop tab challenge, Grayson set a goal of 500 pounds for his first year in Colorado. To his awe, he was able to collect 867 pounds.

“It’s about one million tabs to get to 623 pounds,” explained Chelsey. “and we had gone above and beyond that.”

This year, Grayson is aiming for 1,000 pounds – all to help those in need. He continues to have check ins with his medical team in Denver every three months to watch the tumor and in June, they will be taking their next round of pop tabs.

“It’s not a positive thing,” Jeremiah says, “but one thing we’ve learned from Grayson is to stay joyful. Your attitude can really make a tremendous difference. His attitude has been amazing and it has made this experience better than it could have been and it’s being used for positive things.”

Pop tab drop off locations are surrounding the Black Hills and you can get involved. CLICK HERE for the full list of locations and start collecting your tabs!