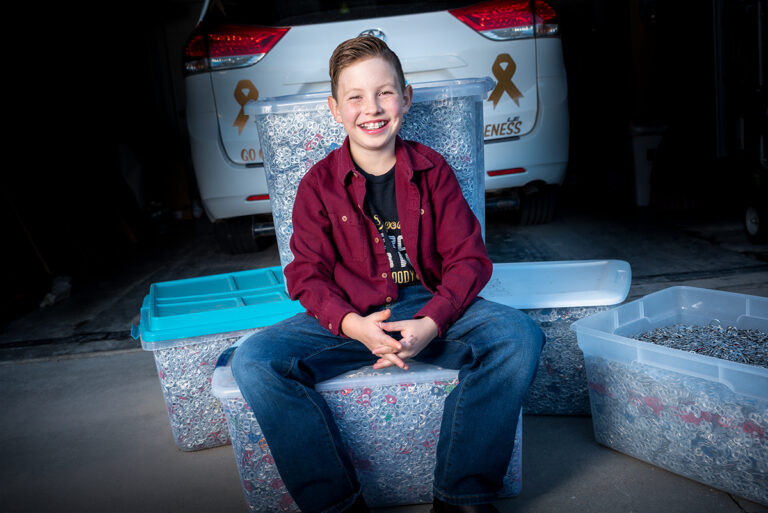 The “Pop Tab Kid” Continues to Shatter Expectations and Inspire Others

Grayson Chapeau was one of two Amazing Kids featured in our Spring 2019 issue. His story immediately struck a chord with readers: Grayson had been diagnosed with Grade II Diffused Astrocytoma, a slow-growing brain tumor, at the age of four. Surgery was not an option, so the family shuttled back and forth between their home in Spearfish and Minneapolis for treatments that included radiation, chemotherapy, and a targeting drug called Mekinist. Most kids would struggle under the weight of such a serious diagnosis, but Grayson turned a negative into a positive. After learning that Ronald McDonald House Charities collected pop tabs in order to help families of seriously ill or injured children with simple needs such as food and laundry detergent and provide a loving home away from home, he decided to embark upon a collection effort of his own.

His first year’s haul, 88 pounds, was modest—but this was just the beginning. The following year, Grayson set a goal to collect 100 pounds and ended up bringing in 433 pounds. Setting his sights on 500 pounds next, he was able to collect 867 pounds. As a scale of reference, it takes approximately one million tabs to reach 623 pounds. When we spoke with Grayson in early 2019, he had set a goal of 1,000 pounds that year. Naturally, he handily surpassed that, ending up with a whopping 1,700 pounds—so many pop tabs, it required two separate trips to Denver in the family’s Sienna minivan.

On the Road Again

Denver has been a frequent destination for the Chapeau family for years. Grayson has regular check-ins with his medical team down there to monitor the progress of his tumor. It was on that first pop tab trip in October 2019 that they learned Grayson’s tumor had changed and was growing. They were told he needed brain surgery within the next couple of weeks, so they returned in early November (with the remaining pop tabs in tow). His doctors decided Grayson was a good candidate for laser ablation surgery, a 6 ½-hour procedure utilizing an MRI with a robotic arm. After the surgery, the doctors advised that they had gone a little farther than intended with the laser and had cut into healthy tissue, putting Grayson at the risk of permanent facial paralysis. Not only did the droopiness in his face disappear by the next morning; he was discharged from the hospital just 24 hours later—a fact that astounded his parents.

“It was just amazing,” Chelsey recalls. “Jeremiah (Grayson’s dad) and I were like, ‘how is that even possible? He just had brain surgery!’ He was actually running up the escalators at the mall.”

The family received another jolt upon learning the results of his latest biopsy: Grayson’s tumor was upgraded to Grade IV. The targeting drug was no longer working, leaving doctors with few options beyond additional radiation treatment. The Chapeaus decided to hold off until after Christmas, hoping to make the holiday as normal as possible under the circumstances. What came next was truly a miracle: the genetics of the tumor came back, and it was downgraded back to Grade II. The medical team were perplexed and couldn’t figure out what had changed between the preliminary biopsy and genetic results, but Chelsey has no doubt.

“I’ll tell you what changed,” she says. We have a big God and He works miracles.”

Faith and a positive spirit keep the family going, even through a year as difficult as 2020. Grayson is now in the 4th grade and has been off all cancer-related drugs since last November. Earlier in the year, he told his parents, “I don’t fear. I live and I love life.” That attitude is one that we can all learn from, Chelsey believes.

“That’s life in a nutshell,” she says. “If we can stop fearing things and just live and love in the moment we have right now we’d all be better off. None of us are guaranteed tomorrow.”

Grayson is still collecting pop tabs, of course. This year, he set a loftier goal than ever: one ton. That’s 2,000 pounds…but if anybody can do it, it will be this Amazing Kid!

If you would like to nominate an Amazing Kid for an upcoming feature, please fill out our submission form on the Black Hills Parent at https://blackhillsparent.com/amazing-kid/